The world’s first robotic system developed in Spain, Adamo Robot made up of cutting-edge technology.

Such as the Universal Robots UR5e cobot, 3D and thermal imaging cameras, sensors and a compressed air compressor.

Adamo is the physiotherapy robot developed by the Future Sense company, belonging to the Inspiralia Group, which emulates manual therapies using compressed air.

Supported by the latest sensor technology, thermography, and 3D vision.

The collaborative robot (cobot) UR5e from Universal Robots that heads this pioneering system complies with millimeter precision as directed by healthcare professionals.

After years of research and development, its first units are already on the market to help clinics reduce waiting lists.

And digitize each patient’s history so they can receive treatment at any center equipped with Adamo, and shorten recovery times.

In back pain. By precisely complying with the instructions of the healthcare professional, the robot guarantees the maximum efficiency of the treatments.

The cobot plots the points map them individually with 3D cameras, sensors, and thermography, and memorizes them.

It is the first time that a collaborative robot used to treat the musculoskeletal system of the spine. Its managers have opted to give maximum medical consistency to its development.

That is why they chose a UR5e, a 100% safe cobot that provides all the guarantees of safety and usability.

Currently, the solution is in the process of medical certification as Medical Device Class IIa.

Although Adamo does not touch the patient, its developers have wanted it to enjoy maximum clinical certification as a medical device.

The robot is in the process of accreditation at the San Pedro Hospital (Logroño) with the involvement of the La Rioja Biomedical Research Center (CIBIR).

How The Robotic System Adamo Works 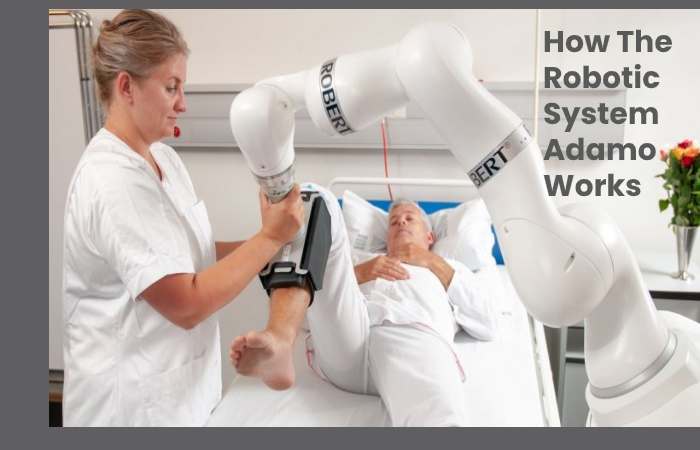 Adamo treatment begins with the diagnosis by a physical therapist, who virtually marks the back points treated in the patient.

The cobot plots the locations map them individually with 3D cameras, sensors, and thermography, and memorizes them.

Then, with intuitive software, physiotherapist programs the pressure to be exerted by the robotic arm, the time, and the temperature at each point of the treatment.

An air compressor that delivers more than 200 liters per minute allows you to mimic manual therapies precisely.

Thanks to a thermographic camera, Adamo measures body temperatures to follow the evolution of the patient in each session. And, using Big Data, objectively predict what results in the treatment will obtain.

The robot physiotherapist also has safety and distance sensors and a heating mechanism on demand so that the patient regulates the sensation of cold and heat.

Adamo Robot Allows Patient Data To Remain In The Cloud

Another advantage that Adamo Robot brings to patients is that their data remains in the cloud.

So that they can receive treatment in any clinic or hospital equipped with the robot with the same guarantees of quality and efficacy.

The medical center and the doctor always have updated online user data.

The physiotherapists to whom we have presented our system are the first to support this solution.

Since it is not a substitute but rather a complement that makes their work more comfortable with Adamo Robot.

To ensure these advantages. So we have opted for a safe and 100% collaborative robot like the one Universal Robots offered us.

Success Adamo reaping is another example of the versatility. And offered by an open and collaborative technology such as that of cobots. So which even goes beyond the industrial field.

Also, that involves the collaboration of robotics with disciplines that aim to improve people’s quality of life, says Jordi Pelegrí, General Director of Universal Robots in Spain and Portugal.