Do You Know the Health Benefits of Saffron?

If you don’t know the health benefits credited to the Saffron spice, then you need to read further.  If the benefits claimed to be had from using this spice are true, you will want to know about it because it could revolutionise not only your love life but your health as well.

There are so many benefits to be supposedly gained from Saffron that in this article, you will become informed about only 6of the health benefits of using Saffron and how you can use this spice.

The stigmas of the Crocus sativus flower are harvested by hand to produce Saffron. A rich, fragrant spice used in cooking and curatively to alleviate certain conditions.

Here are the health benefits that are reputed to occur when you use Saffron either as a supplement or in your cooking;

Saffron Could Assist in the Prevention of Cancer. This spice contains high levels of antioxidants which fight free radicals and reduce oxidative stress in the body and as a result, they inhibit the development of cancer and other diseases.

Kaempferol is one of the antioxidants found in the petals of the Crocus sativus flower. This antioxidant has been linked to health benefits, including having anti-cancer properties, anti-depressant properties and reducing inflammation.

The antioxidants found in Saffron have the power to target and kill colon cancer cells and subdue their growth while leaving healthy cells unharmed. Skin, bone marrow, prostate, lung, breast, cervix and several other kinds of cancer cells are also effectively killed when saffron is used. The Carotenoids in Saffron could also have powerful anti-cancer effects, as some studies have shown.

Studies have found that crocin which is the main antioxidant in Saffron may make cancer cells more sensitive to chemotherapy drugs.

However more research is needed to study the effects of Saffron on cancer in the human body.

Saffron Might Play a Part in Treating Depression and Correcting Low Mood.An analysis of five studies compared Saffron supplements to placebos and found that saffron was much more effective at improving symptoms of mild to moderate depression than the placebos were. Other studies have shown that 30mg of saffron per day was just as effective as the traditional drugs at fighting depression. What’s more, the patients had fewer side effects when using Saffron.

Both the Crocus flower petals and the stigma appear to effectively decrease depression. One study found that a saffron extract increased dopamine levels in the brain without changing the levels of other brain hormones.

However, more trials need to be run before it could be endorsed by professionals in managing depression.

Saffron may improve sexual dysfunction. Researchers have noted in a study looking at women who had reported sexual dysfunction attributed to taking the antidepressant Fluoxetine that 30 mg of saffron taken daily for 4 weeks had reduced sex-related pain, increased sexual desire and vaginal lubrication in these women compared to those who took a placebo.In men who reported erectile dysfunction from anti-depressant use, taking 30mgs of Saffron daily over 4 weeksthere was significantly improved erectile function and sexual drive compared to men who took the placebo. 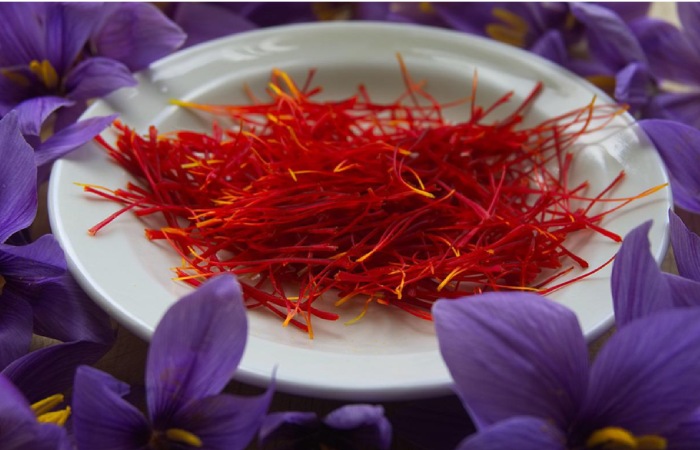 Reduce Heart Disease Risk Factors. Saffron lowers the chance of heart disease by supporting the circulatory system. Saffron appears to decrease cholesterol levels and stop the blocking up of blood vessels and arteries.  Thiamine and riboflavin are also present in Saffron, and these support a healthy heart and help in avoiding heart disease. Crocetin circuitously controls blood cholesterol levels and decreases the severity of arteriosclerosis. In A study on rats, evidence showed that saffron might also be of use in treating hypertension.

Relief From PMS Symptoms. Trials on women aged between 25 and 45 showed that the women who took 30gms of Saffron a day had fewer symptoms of PMS (pre-menstrual syndrome) than those who took a placebo. After smelling saffron for 20 minutes a day, women had lower levels of the stress hormone, Cortisol, and this also may have contributed to reducing PMS symptoms. Women with primary dysmenorrhea had relief from their symptoms after taking supplements containing saffron.

Improve Memory Retention in Adults with Alzheimer’s Disease. Saffron may help treat the symptoms of Alzheimer’s disease due to its anti-inflammatory properties, its memory-improving abilities and its high quantities of antioxidants.

People with mild to moderate Alzheimer’s who took saffron for 22 weeks had lessening of their symptoms that were similar to those who took the drug donepezil but with fewer side effects. Saffron’s anti-oxidant qualities may improve cognitive performance in adults with Alzheimer’s disease. Research linked Crocin in Saffron to the reduction of inflammation and oxidative damage in the brain, which may have beneficial effects on brain function.

Warnings Associated with Overuse of Saffron. Saffron is very simple to add to your diet, and when used in cooking it carries little risk. Doses of only 30 mg a day of Saffron are all that’s needed to produce its health benefits, and at this dosage, it is generally considered to be safe for human consumption.

However, despite the many benefits, it could give you, there is a danger in using too much Saffron. If used in quantities of more than 5 grams a day, it is considered harmful. Speak to a healthcare professional before taking Saffron as a supplement. Side effects include nausea or vomiting, drowsiness and stomach problems, and some people can be allergic to it. If you experience any worrying symptoms, see your doctor.

How to Use Saffron. The dried stigmas of the Crocus sativusL.flowersare used to make food colouring, saffron spice and medicine. In small doses, Saffron has a delicate flavour and goes well with savoury dishes, especially those that have rice, such as risotto. Prior to using the saffron threads, soak them for 10-15 minutes in hot, but not boiling, water. Then add the threads and the water into your dish at the end of cooking as this gives a much richer flavour. In most recipes you won’t need more than a pinch of Saffron. Using too much will give your dish a medicinal taste. One cup of rice will only need 12-20 good quality ‘threads’.

Now you know a few of the health benefits of Saffron and some of its other uses. Unfortunately, most of the claims made for the health benefits of saffron need a lot more research with human trials and for longer lengths of time before they can be substantiated but the early research conducted with the use of this spice have been very promising. You may know of some other uses for Saffron that you would like to share. If you do then feel free to email me and let me know about them. 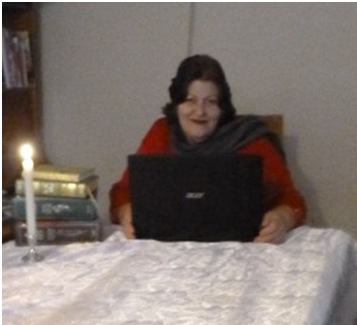 Laureen is a freelance writer for hire who writes blog posts and does editing and content writing. Laureen is interested in writing about lifestyle matters, personal budgeting and Health and Well-being topics, although she is not limited to these topics.

Laureen loves being with her family and friends and loves bushwalking, reading and swimming. Check out my website at https://laureenwrites.com.au and my blog.

Review Do You Know the Health Benefits of Saffron?. Cancel reply

Previous article
How To Recover From A Limb Injury
Next article
You Are Sick and Tired of Diets? Then Try Intuitive Eating