Gastroenteritis In Pregnancy: How To Act?

Gastroenteritis in pregnancy can come hand in hand with states of dehydration from vomiting and diarrhea.

How to act in these cases? Which is the best treatment? This time we will tell you.

Having gastroenteritis in pregnancy represents a disorder of importance for the health of the mother and the fetus. Fluid balance is disturbed, and dehydration can be advanced.

Added to this, if it occurs during the first trimester, we will be facing another problem of maternal water balance, which is vomiting.

For many pregnant women, the first twelve weeks of gestation characterized by a string of nausea that is difficult to control.

Gynecologists lookout for symptoms such as diarrhea and vomiting during this stage to act quickly in case of dehydration.

And is that the dreaded complication is a loss of water that culminates in hospitalization and intravenous hydration.

The use of medications to relieve the symptoms of gastroenteritis in pregnancy is limited, and the therapeutic measures that usually used have to do with diet and hydration.

Let’s look at what causes the disorder and how it addressed.

Also Read: Mononucleosis In Pregnancy And Its Symptoms – Risks And Consequences

Causes Of Gastroenteritis In Pregnancy 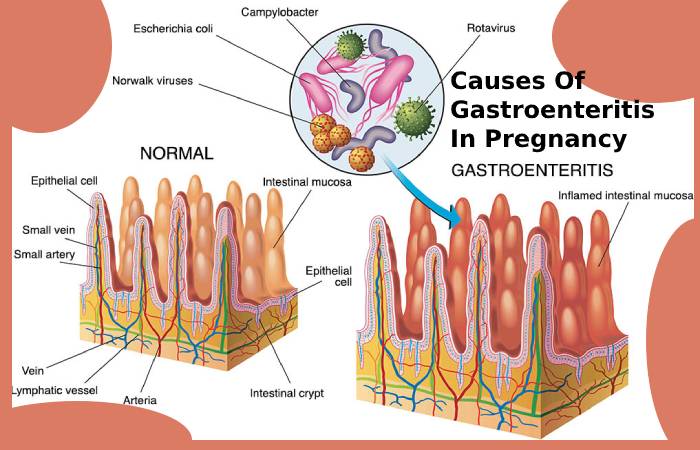 Most cases tend to be viral. The particles enter the body, invade it by contagion and settle in the small intestine, which favors malabsorption.

The body reacts to the invasion, and the associated symptoms begin, which we will see shortly.

But it is essential to know that, in the frustrating process, many of the signs respond to the body itself trying to evacuate a virus.

The most common viruses involved are rotavirus, norovirus, and enteroviruses.

The route of transmission is fecal-oral, which means that a person who has the virus transmits it to another for lack of hygiene and contact, especially on the hands.

However, viruses are not the only culprits for gastroenteritis in pregnancy. Bacteria are also causative agents that cause vomiting and diarrhea in women who go through this stage.

The best-known bacteria behind this is Escherichia coli. It is a microorganism that resides as a healthy flora of the human intestine.

Still, when it changes its position or becomes toxic, producing a toxin, it infects, and the body decides to fight it.

Gastroenteritis of pregnancy occurs with vomiting and diarrhea that can cause dehydration.

Symptoms Of The Pregnant Woman With Gastroenteritis 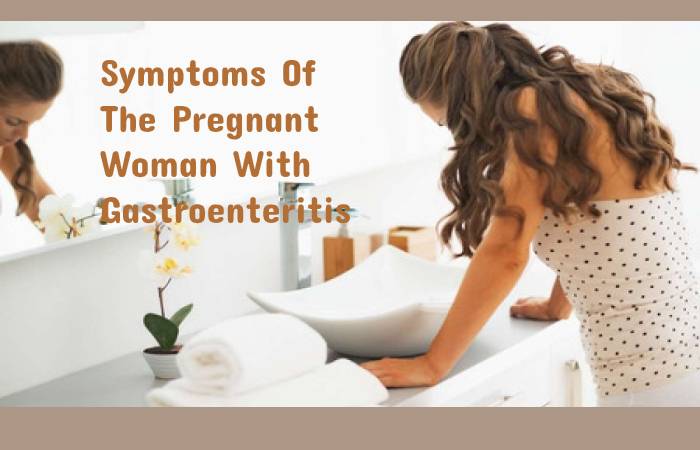 When a pregnant woman goes through this intestinal infection.

The general symptoms do not differ much from those that attack a person without pregnancy; vomiting and diarrhea are the main signs of the pathology.

In any case, in the first trimester, the woman will likely have emesis gravidarum, that is, vomiting induced by pregnancy.

If we add to them those that originate in gastroenteritis, then we can understand their severity in the gestation condition.

When vomiting is challenging to control, the person is not hydrated or fed, and the intestine continues to expel volumes of water and electrolytes outward.

This may lead to dehydration, which is the actual underlying risk of acute infections of this type.

In dehydrated states, the pregnant woman has to compensate with her circulatory system for the lack of internal fluid.

This will make the body decide to limit the delivery of blood to the fetus, reducing the nutritional contribution that comes through the umbilical cord.

Electrolytes also saved, and symptoms appear due to a lack of sodium and potassium. There is tiredness, fatigue, muscle cramps, and headaches.

Symptoms of dehydration in pregnancy are tiredness, headache, and cramps.

How To Deal With Gastroenteritis In Pregnancy?

Hemorrhoids are a common condition that many people deal with. Theories about what causes them include constipation, bowel movements, or pregnancy. Gastroenteritis may cause hemorrhoids, using a perineal spray is safe even for nursing moms.

If gastroenteritis appears during pregnancy, the first thing is to control the symptoms, consult with your primary gynecologist, and establish a hydration schedule.

In this way, the most frequent complications faced.

As for diet, the same meals recommended as in any patient with the same infection, with an astringent and soft plan, without spicy, fatty, or fried condiments.

Drugs to stop diarrhea not recommended at all. The idea is the intestine  released from the virus through this method, thus reducing the days of suffering.

For vomiting, antiemetics can be prescribed, which must be regulated by a doctor at all times, to adjust the dose to the pregnancy situation.

The most widely used is metoclopramide, generally in drops, to increase tolerance.

Cases of dehydration in the pregnant woman admitted.

In the room, intravenous fluids supplied to compensate for the losses and expected that food tolerance would appear to initiate nutrients through the mouth.

Gastroenteritis In Pregnancy Suffers From Two

Both the mother and the fetus are the patients of gastroenteritis in pregnancy.

Taking care of hydration during the illness and feeding yourself conscientiously, without straining the intestine. And it is critical to get through the disorder in the best way.

Remember to consult your gynecologist for any symptoms, and medicate only if he tells you, at the doses he prescribes. In this way, you will be taking care of yourself and your baby.

Review Gastroenteritis In Pregnancy: How To Act?. Cancel reply