The sentinel node is a crucial lymph node in the diagnosis, staging, and treatment of cancers, especially breast cancer. Its correct identification saves surgeries and interventions in the cancer patient.

Oncological pathologies lead, among many other problems, to the overuse of procedures in patients. The sentinel node technique saves some steps and avoids surgeries that would be unnecessary.

The sentinel node is well-defined as the first node that cancer cells target when they separate from the primary tumor.

It is not a metastasis in the broad sense of the word, but the mechanism is similar. From point cancer in an organ, malignant cells come to another site, and some arrive at a nearby lymph node.

For breast cancer, the sentinel node is vital in staging, that is when considering the exact extension of the tumor in the body.

Through the biopsy of the sentinel node, the evolution of the pathology predicted in that person.

Besides, the sentinel node data helps to plan post-biopsy therapy. Based on the cataloged extent of cancer, it will choose whether to use only surgery, chemotherapy plus radiation therapy, or any other combination.

Also Read: Learn How To Detect The First Symptoms Of Breast Cancer

Evolution Thanks To The Sentinel Node

Sentinel lymph node biopsy was an essential advance in oncology. Let’s think that before this technique, a woman with breast cancer used to undergo a major surgery where part of the lymphatic chain removed from her armpit closest to the primary tumor.

It is not a minor intervention, and one of the most common adverse effects is lymphedema, which consists of obstruction of the lymph circulation. Then, due to the impossibility of circulating, the liquid translates into the soft tissues, inflaming the upper limb, in this case.

The removal of the entire lymphatic chain had two objectives: to diagnose the scope and to treat a metastasis already located there.

The problem with this technique was that, if the result of the subsequent biopsy was negative, the entire intervention had been in vain, and the woman then carried the adverse effects.

The idea of reducing the size of the surgery is to improve the quality of life of the patients.

Intervention is still necessary, but the incision is smaller, and nodes removed only if the pathology reports the presence of malignant cells.

In breast cancer, the sentinel node located in the armpit closest to the tumor. 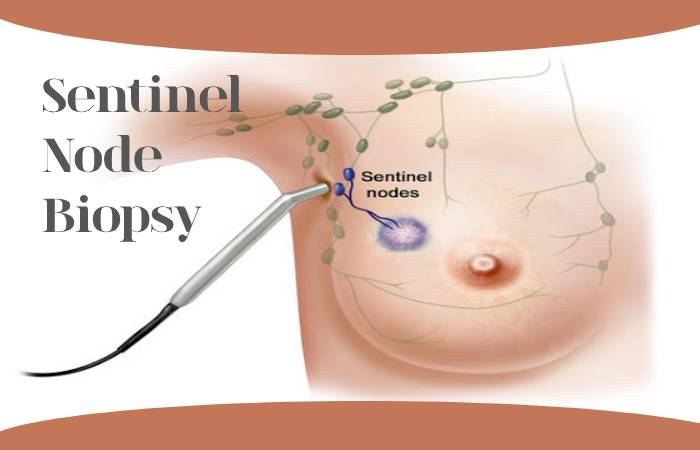 The sentinel lymph node biopsy procedure is part of the protocol for certain breast cancers. Melanomas experimented with, but there is still discussion about their usefulness.

As previously explained, this biopsy takes a sample from the first node to which the primary tumor would drain, to locate malignant cells. If the result is negative, then we can rest assured that the cancer is localized and contained in the organ.

This is a smaller incision than is required for major lymphatic chain removal surgery, but it is not without side effects. The most common are subsequent bleeding from the wound and puncture site infection. However, the risk is shallow.

How Do You Know Which Is The Sentinel Node?

The choice of the best method to locate the sentinel node will depend on the professional treating team.

To perform the biopsy, the sentinel node identified. For this, the health teams use techniques that make this node evident above the others. In this way, the surgeon performs his work in the right direction.

One way to mark the sentinel node is with radioactivity. First, a solution with radiation power placed in areas near the primary tumor.

This solution will migrate to the lymphatic system and return radioactive to the first node in the chain.

Another technique is that of the blue tincture. Instead of a radioactive substance, the injection carries blue dye, which makes the same journey, passing from the area of the primary tumor to the first nearby node.

The choice of the best method depends on the treating team. Both are efficient in locating the sentinel node, and their adverse effects are minimal.

The radioactive substance is weak and does not cause internal radiation problems in the cells. On the other hand, the blue tint can generate bluish discoloration of the urine for a time.

What Do The Biopsy Results Mean?

There are two ways to follow after sentinel node biopsy. If the effect is negative, this means that malignant cells were not detected, so there will be no further surgery.

The patient’s situation staged, and the corresponding treatment started.

In the event of a positive result, surgery should extend. This means that cancer cells detected in nearby nodes and that there is tumor expansion.

It is crucial, as we always warn that the early times in oncology fulfilled. The earlier the procedure performed, the sooner the results will be available, and the better the prognosis.

Review What Is The Sentinel Node?. Cancel reply

Previous article
Why Does The Flu Spread More In Winter?
Next article
What Is Neural Therapy?